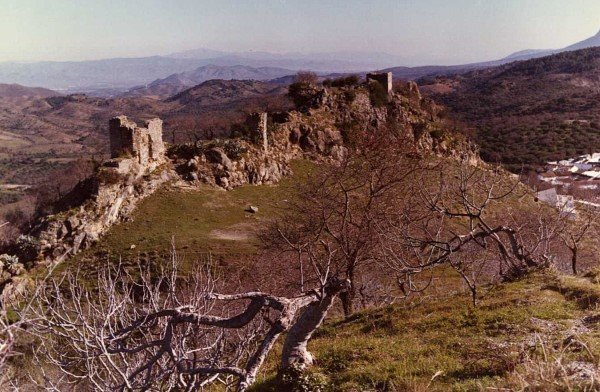 Photograph of the Castle of Monda in the early seventies with some towers and remnants of walls, when no reform or reconstruction had been carried out yet. 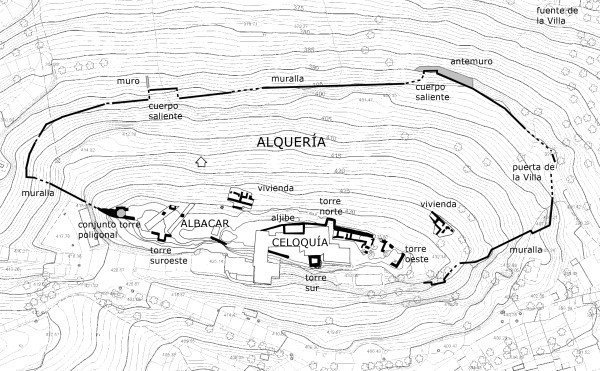 The Castle of Monda, fortress and settlement.

In this image we can contemplate the original remains that are currently conserved from the Castillo de Monda where we distinguish two parts: the “celoquia-albacar” complex, the fortified area where the hotel is located; the farmhouse and the space destined for the population, protected by an important wall. 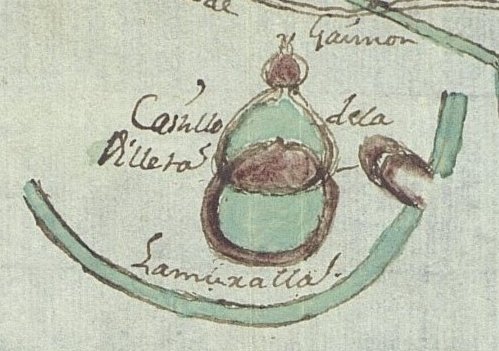 The Castle of Monda in a drawing of the sixteenth century. It is the oldest graphic representation of the castle, known as Castillo de la Villeta, and it has a wall and an entrance door topped with a semicircular arch. 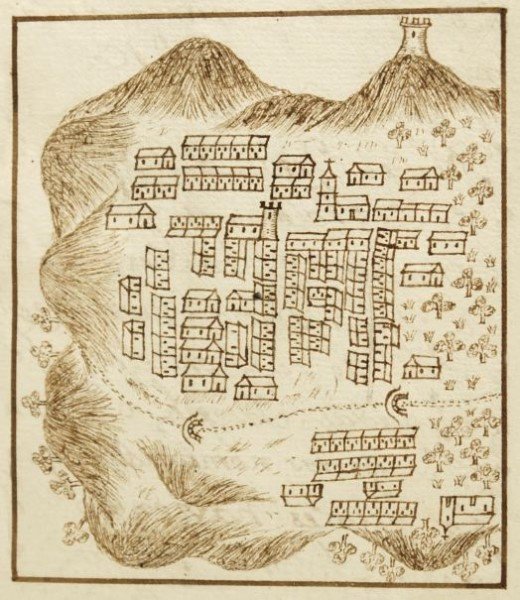 The village of Monda in the eighteenth century. We are facing a drawing of the year 1572 where the town of Monda is represented with its Castle de la Villeta, represented by a tower on the top of a hill. The drawing distinguishes the town square, its church and its neighborhoods. 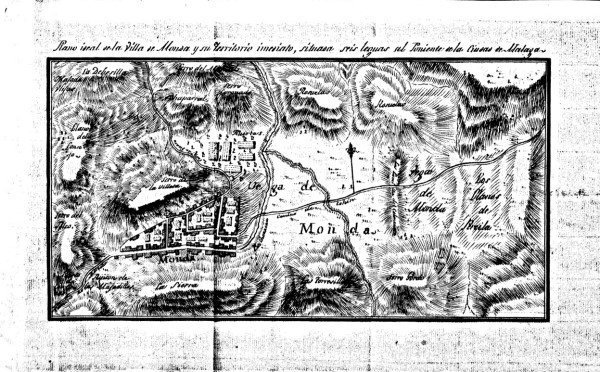 Drawing of the town of Monda from the late eighteenth century made by the military engineer Domingo Belestá y Pared. It represents a large part of the municipality of Monda, the town and the castle, where in great detail it differentiates the area of ​​the “celoquia-albacar” and the farmhouse. 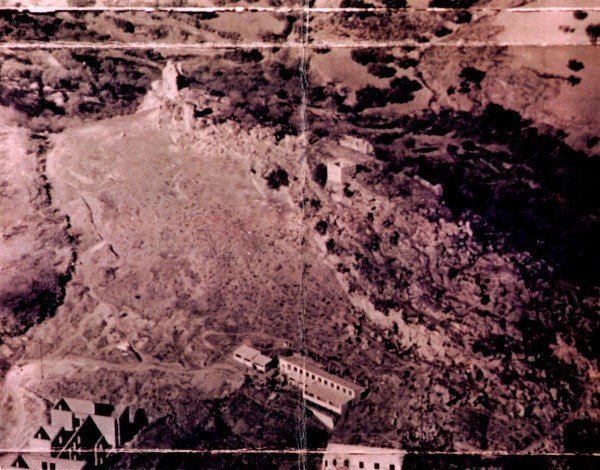 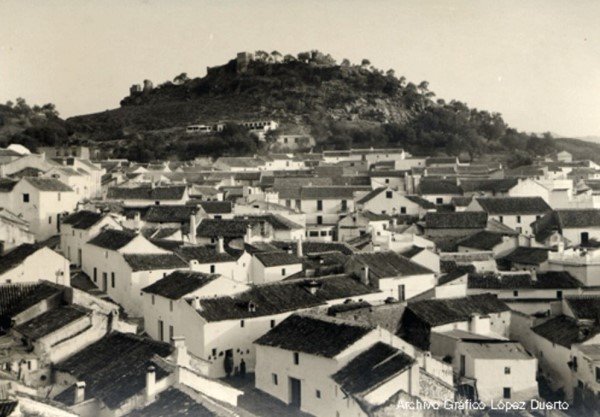 In this photo from the sixties we can see how the ancient remains of the Monda Castle dominate a town of Monda, composed of small cubic volume houses covered with Moorish tiles, sitting on the hill of La Villeta for hundreds of years.

At the western end of the Castillo de Monda remains one of the most interesting elements, the polygonal tower. It is a tower of eight sides built by the Almohad dynasty in the twelfth century and is typologically related to the Torre del Oro in Seville. 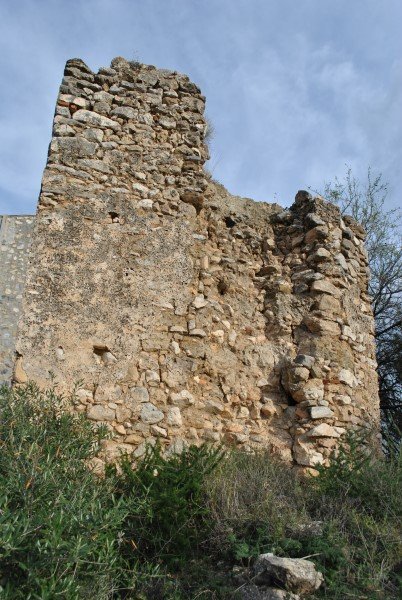 In the XIV century the polygonal tower was reformed by the Nasrid dynasty, which built the Alhambra in Granada, covering it with a square tower. 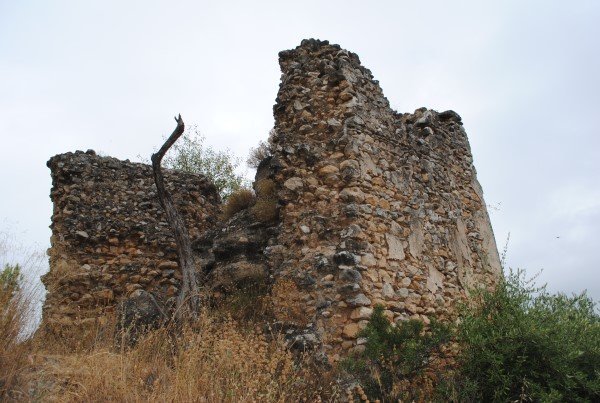 The west tower seen from the north, where we appreciate its constructive structure and how part of the original plaster is preserved for more than five centuries. 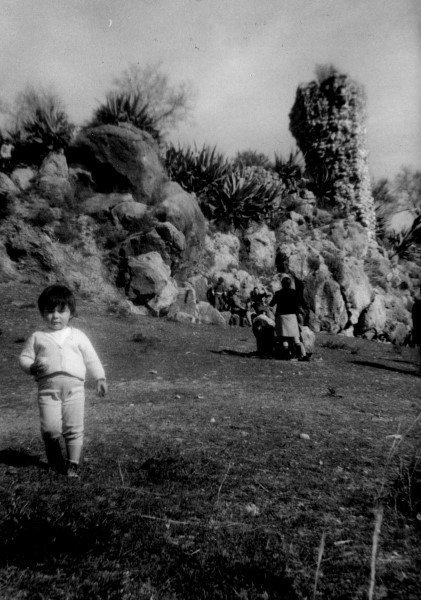 The Castle of Monda in 1967. In the image, in the background, we can see the remains of a tower that has not reached our days.

The environment of the Castle was the place chosen by the “Mondeños” (inhabitants of Monda) to organize picknicks and some celebrations. 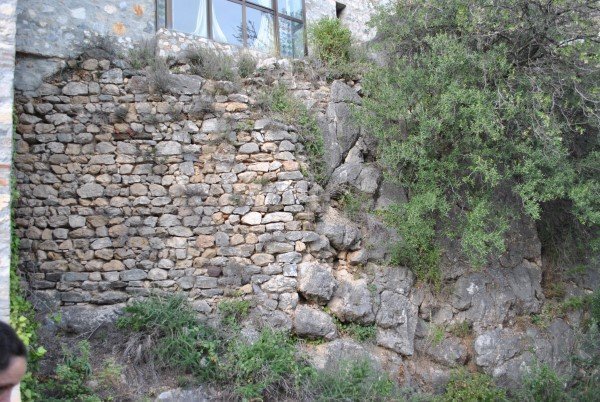 Remains of the tower

Remains of the wall under the bar area of the Hotel El Castillo de Monda, attached to the bedrock.

The builders of the fort took advantage of the emerging stone elements to integrate them into the castle and function as part of the fortification. 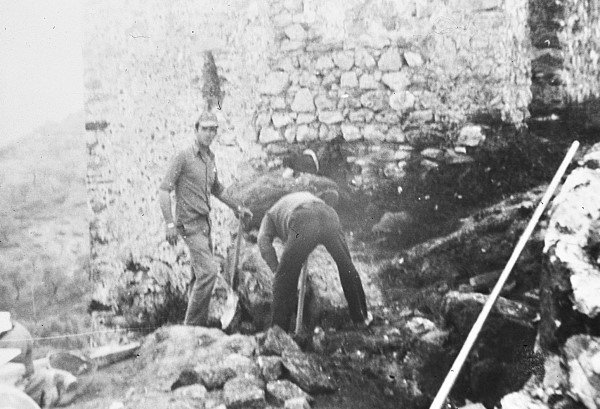 The south tower, known as “Casa del Moro” or “Torre Cuadrada”, has been the best preserved and it housed the warden of the Castle.

In the image we can see two workers in the first works of reconstruction of the Castle, developed in the mid-seventies. 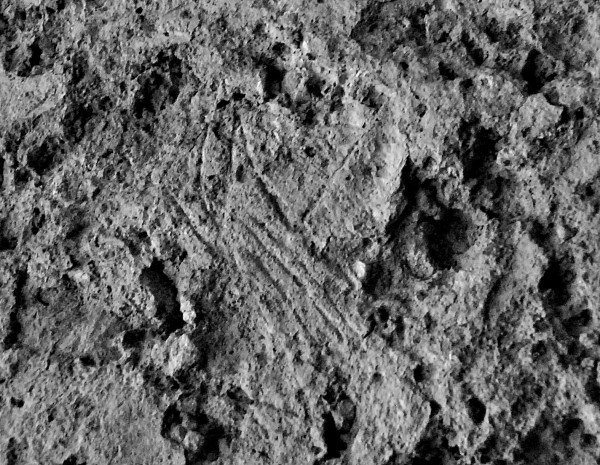 At the entrance to the south tower an old engraving is preserved, Interpretation is difficult, since it is not complete, but it is possible that it represents some symbol of protective character. 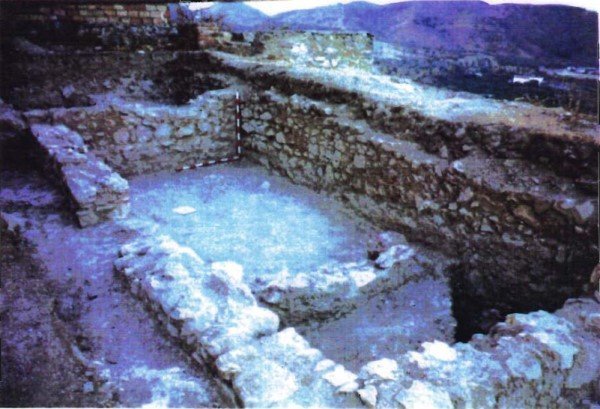 During the 18th century the ruins of the Monda Castle were victims of plunderers who, guided more by fantasy than by reality, sought hidden treasures.

We know that in the zone of the present garden they made several holes because in the archaeological excavation of 1989, to which this image of an old room belongs, this intrusion could be documented. 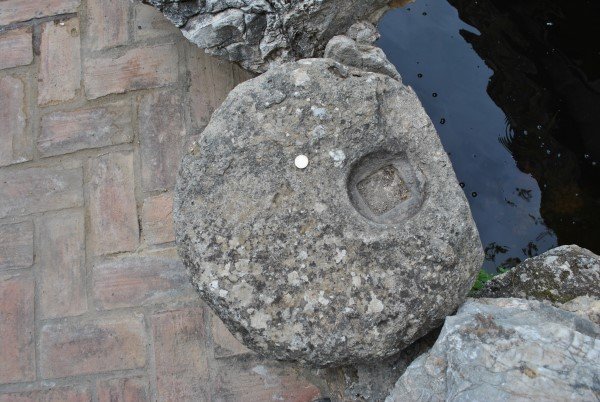 Next to the pond of the garden is this stone called a “gorronera” or “quicialera”.

It used to be part of the door behind the pond that gave access from the highest and fortified area of ​​the Castle to the adjacent population. 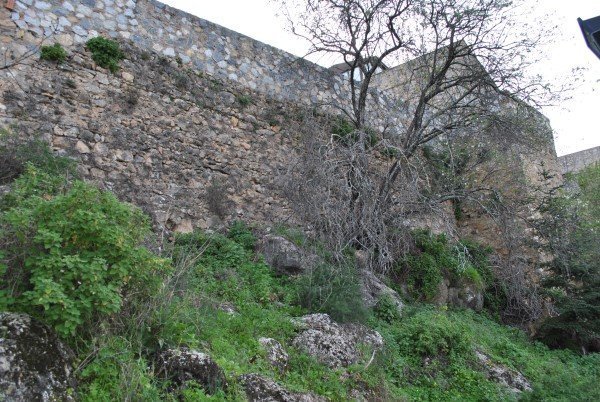 From the footbridge of the garden you can see the northern wall of the Castle, built more than six hundred years ago, currently replenished with modern building materials.

It is a wall of a large scale and resistance and it was the side that had a door to communicate with the population. 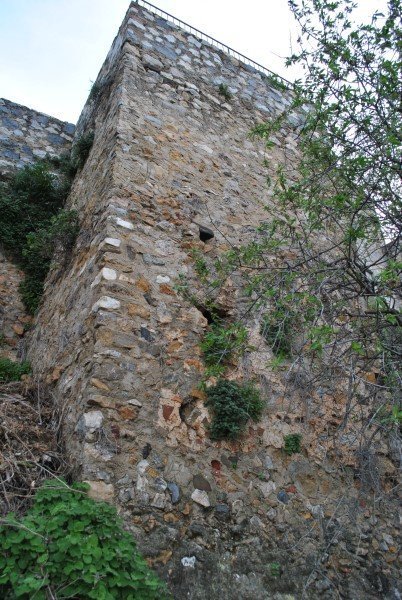 The north tower is another of the jewels of the Castillo de Monda.

It is a massive tower, currently finished in a small viewpoint. Its conservation is excellent and in its walls the original plaster is still preserved with a type of a  decoration called “vitola”. 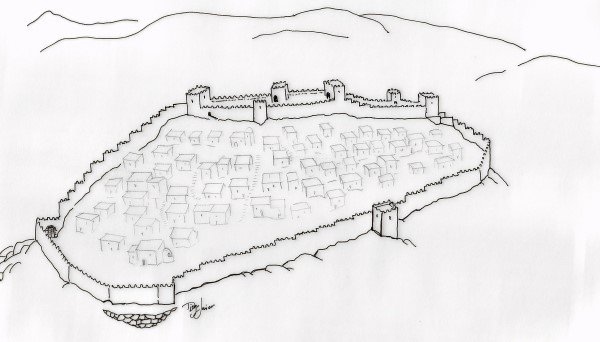 In this recreation of the Castle of Monda made with historical, graphic and archaeological documents, we can observe its two constituent elements, the “albacar” and the “celoquia” in the highest and fortified zone, and the population in a lower level, protected by a tough wall. 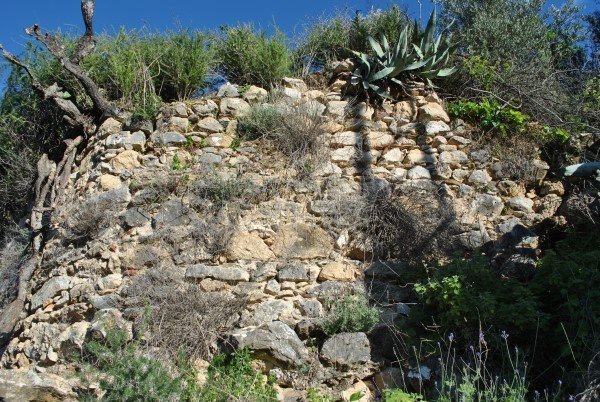 Without the skin and the plaster, we can observe directly what were the materials used for the construction of the wall: masonry, ashlars, bricks and fragments of tiles joined by a mortar of earth and lime. 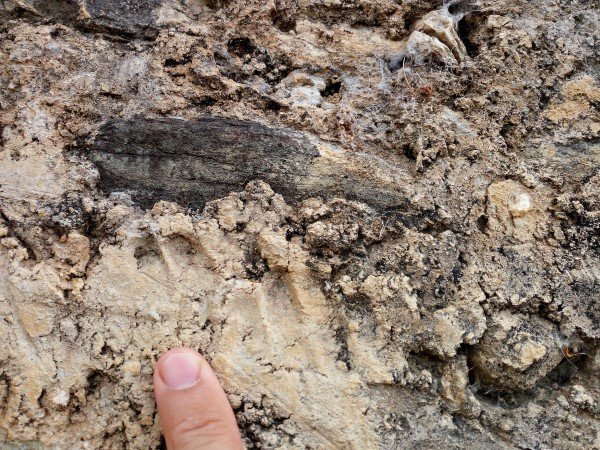 Interestingly, in the wall some impressions of the fingers of the “alarifes”, the Islamic masons who built the wall more than six centuries ago, have been preserved. 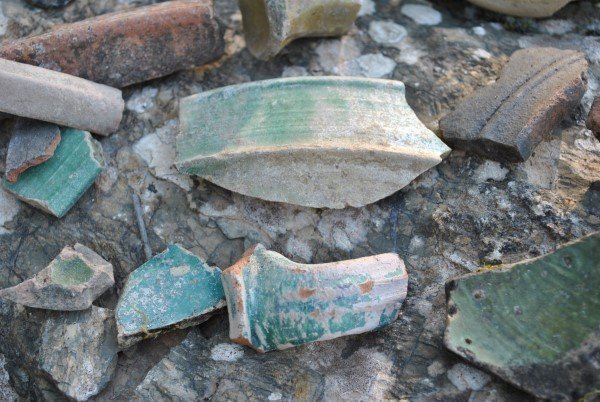 Centuries of human occupation have left more traces than the towers and walls of the castle; around the Castle appear thousands and thousands of ceramic fragments that tell us about their gastronomic and culinary customs and that archaeologists use as elements of chronological dating. 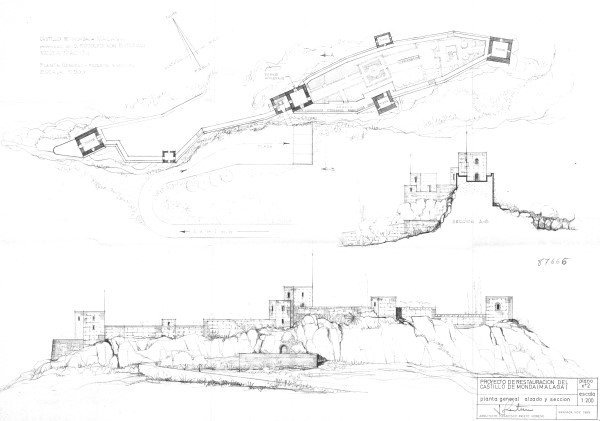 In 1969 the architect Francisco Prieto-Moreno, curator-director of the Alhambra in Granada and restorer of the Alcazabas of Málaga and Almería, undertook an ambitious project to restore the Monda Castle inspired by the Alhambra models that only came to be executed in a small part.

It wasn’t until 1996 that the entire restoration project was fully completed and the hotel could open its doors for the first time.

Hotel Castillo de Monda is a beautiful castle located in Monda converted into a stunning hotel. Situated just 15 minutes from Marbella Center, the hotel lends itself for weddings, corporate functions and private weekend getaways as well as relaxing holidays. Stay Up To Date!

Looking for a romantic Valentines Surprise?

When booking your room on our website to see our amazing Valentines offers & discounts!
Book your room
We use cookies to ensure that we give you the best experience on our website. If you continue to use this site we will assume that you are happy with it.OkRead More